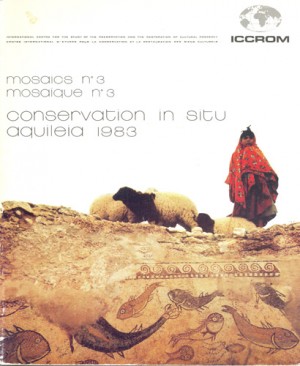 The 2nd International Conference of the Committee took place in Aquileia in 1983, and was dedicated entirely to Conservation in situ. It was there that the Committee took its present form. That is, the members of the Board were no more self-appointed but elected by the conference participants. Paolo Mora was re-elected president, and the other members of the Board came from France, Britain, Italy, Spain, Tunisia and Cyprus. ICCROM continued its support of the ICCM by running the Secretariat, editing and distributing the Committee’s Newsletter, already at its 7th issue, and, more importantly, selling the Committee’s publications. The proceedings were published as Mosaics no. 3: Conservation in situ.