Mosaics make a site; The Conservation in situ of Mosaics on Archaeological Sites 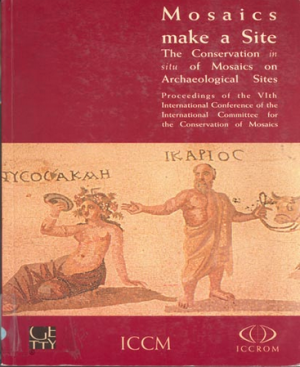 The Cyprus meeting, with the theme “Mosaics make a Site” took place in 1996 and marked the 6th International Conference of the Committee. Because of the location of the island, the conference attracted, for the first time, a large number of participants from the Near East. Also, because of the provision for simultaneous translation into Greek (through the support of the Getty Conservation Institute), a large number of Greek conservators took part in the conference and associated themselves, also for the first time, with the Committee.
Unfortunately, this meeting also marked Margaret Alexander’s last association with the Committee. Already very seriously ill, she made a superhuman effort to come to Cyprus, and one hopes that, despite the great pain she was suffering, she enjoyed the love and devotion of everybody around her.A new Board was elected, with archaeologist Demetrios Michaelides as President and Roberto Nardi again as Vice-President, and the conference resulted in three recommendations. These are, in effect, a further calibration of previous recommendations insisting on in situ conservation and on the use of techniques compatible with the nature of ancient materials, which, for the first time, take account of the general public as an important factor, and also touch the question of allocation of financial resources – something that still remains a serious problem in mosaic conservation.The proceedings of the conference have been published as “Mosaics make a site”. The Conservation in situ of Mosaics on Archaeological Sites. Proceedings of the VIth International Conference of the International Committee for the Conservation of Mosaics.